The Westland Petrel is also known as the Westland Black Petrel, or Taiko. It is endemic to New Zealand and one of four Procellaria petrels that can be found breeding in the New Zealand region.

There is evidence that its breeding range was more extensive prior to the arrival of humans and the present remnant population of about 3000 breeding pairs is no doubt a result of continuing losses due to introduced mammal predators and commercial fishing bycatch.

In order to avoid natural aerial predators, such as the New Zealand Falcon or Harrier Hawk, the Westland Petrel will fly in or out of its breeding grounds only during the night. Peak adult flight activity occurs within the first hour after sunset, when the petrels fly in to the breeding grounds, and the last hour before sunrise when they depart back out to sea.

During daylight hours Westland Petrels will often remain on the breeding grounds, whether maintaining ownership of their burrow, incubating their egg or guarding their newly hatched chick, but they always remain quietly out of sight in their burrows.

Upon landing, the petrels may be observed to sit quietly for a few minutes before walking off to its burrow nearby. The colony soon comes alive with various squawks and cackles as more birds return and breeding pairs greet each other at their burrow.

Some Westland Petrels will launch back out to sea during the early evening. Most likely these will be birds that have spent the day in their burrow, or much longer if they have been incubating an egg. To get airborne they climb onto a raised launch site, often old tree stumps, leaning trees or cliff tops. Such launch sites are necessary as the petrels have evolved a soaring style of flight and do not have sufficient flight muscle to lift themselves directly off the ground.

When they emerge from their burrow for the first time Westland Petrel fledglings may still be fully covered in grey downy plumage and spend most of their time sitting quietly near their burrow entrance. Others may have a mixture of down and adult plumage and display more interest in exploring their surroundings and exercising their wings, whilst the more advanced display full mature plumage and are very active exercising their wings and practising launchings. 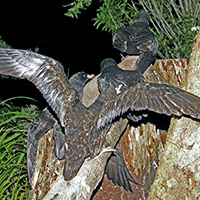 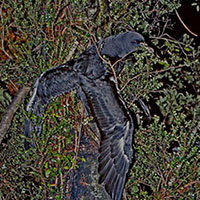 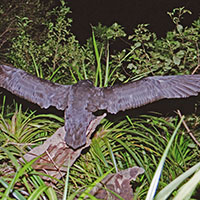