By the beginning of April many hundreds may be seen flying in to the wider breeding grounds on any one night, increasing to several thousand by the end of the month. By the end of April the colony has become very active and noisy as breeding pairs renew their pair bond since they last saw each other the previous season.

The family burrow used each year is defended, mostly by the male, from other petrels and is cleaned out or extended. Other breeding birds may have to dig a new burrow or find an unoccupied one. During this early part of the season non-breeding petrels come and go regularly. They may be birds that have not yet paired up with a mate, or may have recently paired with a mate, but have not yet found a suitable burrow. By the end of April most breeding females depart on their “pre-laying exodus” prior to egg laying.

By mid May the females have started returning to lay their single egg.

Once the egg has been laid the male takes over the first incubation shift and then both pairs take turns. Incubation takes about 64 days. Non-breeding birds may still be regular visitors to the colony.

From mid to late July the egg hatches and the young chick is guarded constantly by one or other of the parents for up to three weeks.

By the end of August most of the parent birds have left their chick to fend for itself and will return irregularly to feed it. There may be occasions when the chick gets fed by both parents on the same night, but then it may not get fed again for 5 days.

The chick growth stage. Most parent birds return in the early evening to feed their chick and then depart again shortly after.

The feeding takes place inside the burrow. By late October some of the oldest chicks have begun to explore outside their burrows for the first time. Parent birds come in less and less often as the chicks reach their maximum weight of about 2 kg.

Most parent birds have ceased returning and the chicks are left to fend for themselves.

During November fledglings at various stages of development emerge from their burrows and become increasingly active. Once they have lost their downy feathers they begin exercising their wings and practice launchings.

They must also slim down to flying weight. It will be two to three weeks after first emerging from their burrow that they become strong enough to get airborne and fly out to sea. Return in five years. 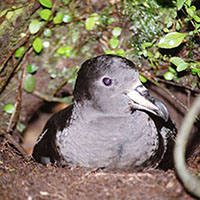 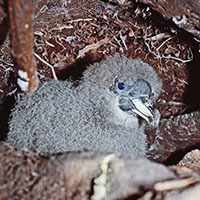 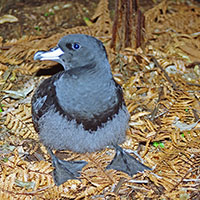 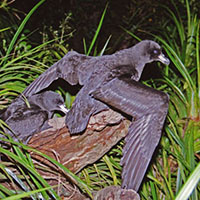